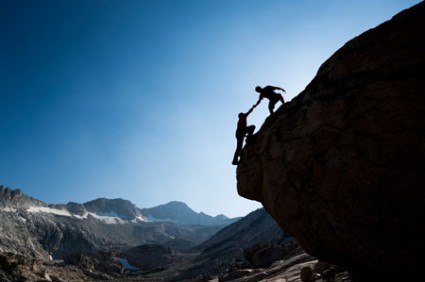 I am both a counselor/therapist and a business consultant. It’s not easy trying to explain how that came to be, in 1000 words or less. But it does make sense and my background in one informs my view of the other in more ways than may be obvious to the layperson.

My view is that both business consulting (or coaching) and therapy basically deal with the same thing; people and problems. When one is doing strategic planning, s/he often starts by doing a SWOT analysis: Strengths, Weaknesses, Opportunities, and Threats; internal and external, we look for what’s working or not working and why.

Similarly in therapy or counseling, we look at what’s working, and not working, for the person, couple or family. We take a history and try to figure out the internal and external factors that drive a person’s thoughts, feelings and behaviors. We look at the relationships that have influenced and are influencing the person.

And, in both business and personal work, I try to help the individual or organization, make an objective effort at figuring out what’s really going on versus the story or script that usually gets played.

Often in manufacturing, when there is a problem, the people involved will do what’s called a “root cause analysis” to try to figure out why the widget doesn’t work or how come the package that was supposed to end up in LA, ended up in Taiwan. In psychotherapy, we call it doing a bio-psycho-social assessment. Either way, what we’re trying to do is get to the root of the problem, thereby permitting us to fix the problem rather than fixing some convenient but, alas, extraneous variable.

I grew up in a family owned manufacturing environment, old school and old technology to start. When I worked in the plant as a kid, OSHA and the EPA had not yet come into existence. No one talked about ISO or Six Sigma; calculators didn’t exist, and the Social Security Administration, NASA, and major companies only used computers for very esoteric purposes.

I have had every job in a manufacturing environment from cleaning the toilets to CEO. I teethed in the metal bending and plating businesses; tool and die, stamping, machining, welding; nickel, chrome, and zinc plating (to name a few). My strengths are my tactical and strategic analysis and planning; operations; marketing and sales.

I take a systems approach to business. It isn’t sufficient to have a good idea or product. For long-term success, one must also have a coherent and cohesive plan that addresses all aspects of a business; and importantly, one must execute that plan well. It’s important to have a clear understanding of “the process” as well as the goals and objectives. This is true for every aspect of the business whether you’re considering obtaining financing or trying to get a prototype into production.

The biggest influence on my management philosophy was watching our customers’ (like IBM and Xerox) struggle to get quality products out the door, while Japanese competitors started eating their lunch. Early on, I stumbled across the work of Ed Deming (the “Father” of Japanese quality) and I came to take his views as my own. I had the pleasure of studying with Mr. Deming very early in my career and late in his.

The core of Mr. Deming’s teaching was simple. He viewed most problems, or errors, in companies to be quality problems. He also believed that most of these failures were management related and he could prove it by applying sound process and statistics to root out the real cause of defects whether the term “defect” refers to a flawed product or flawed strategic plan. (Including a flawed implementation)

I hold his philosophy and measurement driven techniques to be as valid today as they were when he first introduced them to Japan in the early 1950s. (When no one in the US was interested in his views). Quite frankly, if our bankers had been adhering to his tenets, we wouldn’t be in the financial mess that we’re in today.

Although Mr. Deming first gained recognition for his work in quality improvement, it is clear to any student of his that his views and techniques carried over into all areas of business, from safety and health, to protecting our environment and husbanding our resources.

It is my view that all of the wonderful advances in business that have been garnered by developing the ISO standards, Six Sigma programs and their cousins, can trace their roots to the work of Ed Deming and his peers.

Those of you, who have grown up in a family business environment, probably know well that they are often not exactly ideal settings for raising well-balanced and fully self-actualized individuals. Without going into a lot of details, I’ll just say that by the time I made my way to the President’s office of one or our firms, I had more than my share of “issues” and a few crutches that were not serving me well.

That was the bad news. It was also the good news. By the age of 32, I was in some ways quite successful, but….. I was a mess. I drank way too much. I was totally stressed and I felt like a victim. Happily, I was able to do something about it. I got some help, got into therapy, quit drinking and started to figure out what was important to me in life, rather than simply living based on what I thought I was supposed to be doing.

This turn of events led me to participate in a not for profit, self-help, group that I found very rewarding. This experience, in turn, led to my decision to get into the counseling field.

I chose a Social Work program over psychology for several reasons. First, I knew that Syracuse’s MSW program focused on Family System’s theory, which I knew something about and liked. And second, I had business responsibilities, to which I needed to attend, and I could do that by choosing SU’s Social Work program. There were several other factors that influenced me. Give me a call or e-mail me if you’d like to hear about them.

Family Systems Theory is my theoretical base. Basically Family Systems says that we end up who we are and where we are as a result of some combination of nature and nurture. Neither our personalities alone, nor the events that happen to us determine who we are and how we feel about it. Both inform each other and, if we are to make real changes, it is very helpful to have a better understanding of the impacts our family of origin has had on us, along with a more objective view of how we help and hinder our own progress in life.

My Family System’s base is greatly informed by the work of Milton Erickson, MD and his many students. Erickson was a psychiatrist and counselor whom I consider to be the grandfather of at least a half dozen different schools of short-term therapies and techniques. Some of his colleagues and/or students include: Jay Haley, Ernest and Sheila Rossi, Stephen Gilligan (with whom I took supervision), Gregory Bateson, Bill O’Hanlon, Jeffrey Zieg, Richard Bandler and John Grinder, Steve and Carol Lankton, Richard Fisch, John Weakland, Lynn Segal and many others.

Erickson’s work was greatly informed by his own disabilities. He was a polio survivor and reported learning to read and understand people while he spent two years in bed, paralyzed, as a teen. His ability to develop rapport and to speak directly to a person’s unconscious has been the focus of study for decades; with many of his students taking one aspect of his technique and expanding it until it developed into it’s own school of therapy.

I attempt to integrate Dr. Erickson’s beliefs and attitudes into my work. So, regardless of whether we’re doing “cognitive-behavioral” therapy, or alcoholism counseling, or blaming mom for your current plight, I’m going to be trying to emulate the attitude and focus that I have learned from Milton and his students.

The tenets of both 12 Step programs like Alcoholics Anonymous and Buddhism also inform my work. I find both schools of thought to be very practical and helpful in helping people become unstuck. Both philosophies share common concepts albeit using very different language. Suffice it to say that my view is that when a person comes to a therapist in a effort to solve a problem or change their life, the therapist can offer education, empathy and rapport. But, 90 percent of the work needs to go on outside the therapist’s office.

A tremendous amount of work goes into changing a lifetime of habits. It’s not solely an intellectual exercise. It takes practice. Practice generally requires a framework; whether it’s a gym, or a church, or a philosophy. I think it’s important to connect a person with what he or she actually believes, in a way that they can understand it and then help them get into the habit of living it.